Designing and Implementing Policies that Promote the Nexus Between Peace, Security and Development to Accelerate the Implementation of the SDGs in Africa 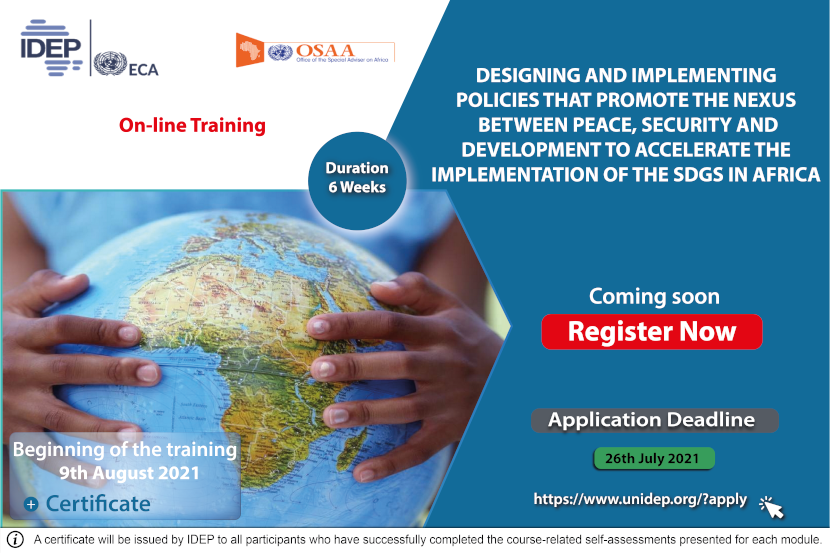 To help strengthen the capacity of African countries in integrating the nexus approach in their policies, programmes and strategies and plans, the United Nations Office of the Special Adviser on Africa (UN-OSAA) is implementing an extra-budgetary project on “Strengthening the capacity of African countries to design and implement policies that promote the nexus between peace, security and development for an accelerated implementation of the Sustainable Development Goals (SDGs)”.
The project is being implemented in close collaboration with key partners including the United Nations Economic Commission for Africa (UNECA) and the United Nations Office of the High Representative for the Least Developed Countries, the Landlocked Developing Countries and the Small Island Developing States (OHRLLS). The project is funded from the United Nations Peace and Development Trust Fund, the Peace and Security Sub Fund which is supported by the People’s Republic of China. Through this project, UN-OSAA aims to contribute towards raising awareness of and strengthen capacities of African countries to formulate and implement policies that reinforce the interlinkages between development, peace, security, humanitarian and human rights.
In implementing the project, UN-OSAA has prepared a baseline assessment study on the nexus, which assesses the degree of awareness, understanding of the nexus at national level and the capacity needed by African countries to formulate and implement policies that reinforce the interlinkages on development, peace, security, humanitarian and human rights. Based on the study, a training manual has also been prepared and both documents were validated during virtual sub-regional workshops that took place in June 2021. Therefore, the current nexus online training course is a direct response to the capacity gaps identified by the study and will be developed based on the training manual.
The online nexus training course is being implemented by ECA/IDEP on behalf of and in collaboration with UN-OSAA.
Read more